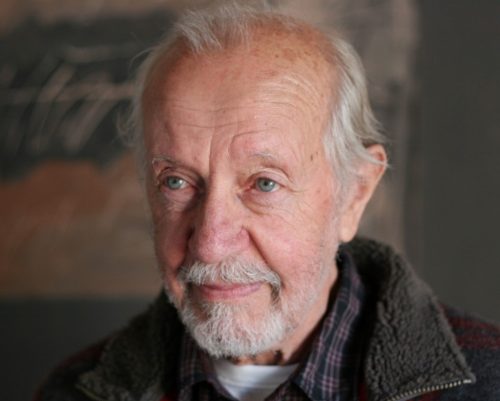 Karl Stengel has lived through important and dramatic periods in the history of 20th century art.  Born in 1925 in Neusatz, on the banks of the Danube, from his early childhood he had the impulse to “have to” draw and was strongly attracted by the contrast of black and white. After the war and the years in the Russian prison camp, a long time passed before a middle class child could be admitted to an art academy. It was the period of Socialist Realism, a style imposed by the Soviet Communist Party. There was no room for artistic individualism, or to seek one’s own possibilities, expressive style, or creativity. Upon the arrival of the Soviet tanks with the occupation of Hungary in 1956, Karl Stengel fled to Monaco in Germany. Studying at the Akademie der Schönen Künste, he was surprised – and not in a positive way – by the lightness with which his young colleagues took to abstract modernism, especially after the dominant artistic expression extorted by Hitler. Again, he could not see the way to follow his path with sincerity. He was unable to follow his impulse “to have to paint” for almost two decades. Then the strong call of the voices that wanted to be expressed and painted, resurfaced, together with the desire to see and hear what others hadn’t seen, even if it was in front of them. Karl Stengel passed away in his beloved Tuscan countryside, 25 June 2017.